Late September, 2016. I head out on what I believed was my last backcountry ski trip of the year. The snow is melting, there are rocks and patches of grass. I say my goodbyes until next year.

Late October, 2016. My birthday is approaching. The weather gods get their memos mixed up with the birthday gods, and a freak storm/snow event occurs.

I am visiting my Loverboy in Canberra, planning on doing some mountain biking while he works. I see a facebook post about the snow, and how its such a shame all the resorts are now closed and no one can use the chairlifts.
A bright idea occurs to me. I DON’T NEED CHAIRLIFTS!
A plan hatches, I am nervous – can I really head out on my own for some backcountry fun? I am reminded of my almost failed attempts at leading a trip a few weeks prior, and waver.

I am laying in bed, sleeping in like the unemployed bum I am, while Kirren works. I look at another picture of the beautiful blanket of fresh snow that fell again that night.
“Fuck it” I say, throwing the doona off me, and putting on some fresh socks.

I pack a beannie, a backpack, some warm sleeping stuff and a torch. I buy a maccas coffee and start driving into the green hills and blue sky towards the snow.

I arrive mid-morning at Rhythm Snow Sports. I wasn’t even sure if they would be open now that the snow season is officially over.
They were, and the worker cracks an envious smile as he helps me kit myself out in some telemark skis. Then he delivers the best birthday news to date: Charlotte Pass road is open, and they’ve been clearing the snow. I can literally drive all the way to Charlotte pass, skipping 8-10kms or boring, aweful skiing.

I drive up into the mountains, along the cutout road. I park amongst a handful of other lucky non-working skibums who have driven in their adventure-mobiles to have unlimited access to the backcountry and its fields of fresh powder.

In true Mowgli-style, and the loosest definition of trip planning, I have forgotten several key ingredients. Like ski clothes. And gloves. And sunscreen. And real food.

I don my singlet, cargo pants, beannie and sunglasses. I get the litre of iced coffee out of the back and hide it under a pile of snow. I find an old squished musili bar under the seat of the car, and shove it in my pocket.
Then I ski off into the blinding white sunshine, heading towards Seaman’s hut.
I make fast progress, skiing solidly along the flat until I get near Seaman’s hut some 8kms from the car. I decide that the looming clouds on the other side of the Mainrange aren’t actually getting any closer, so its probably ok for me to do some off trail exploring. I ski wobbly telemark turns down to the Snowy River, zigzagging my way back up the hill before turning around again and practising in the fresh snow.
I slowly make my way back this way – up the hill, then back down, each time getting a little closer back to the car. 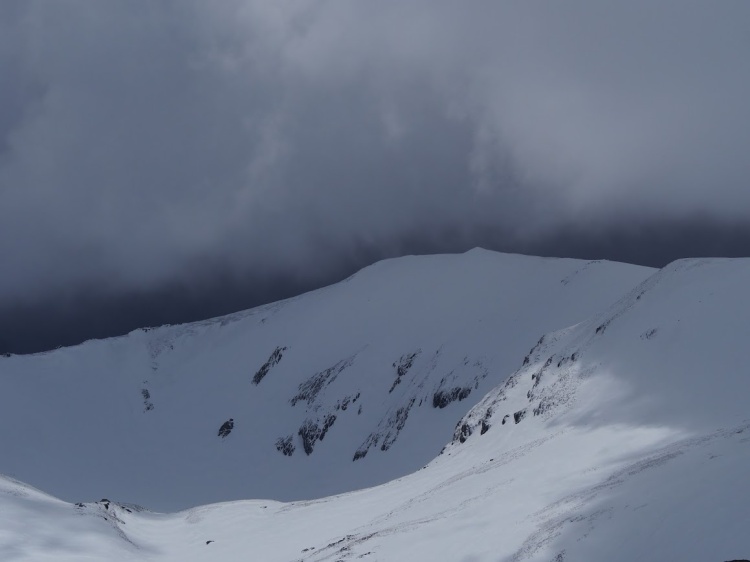 Just on sunset, I arrive back at the carpark. I open the boot, lay the matress down, relax in the fading light and drink my now icy cold iced coffee. I save the musili bar for tomorrow.
After a solid sleep snuggled in the back of the car, I get up for some breakfast of iced coffee and fresh snow.

The overnight temperatures, combined with the melting sun the day before, have frozen the crust of the snow into an icy mess.
Ice doesn’t mesh well with telemark skis.
So I decide to spend the morning practising on the sheltered soft snowy slopes of the closed Charlotte Pass resort. I meet an old crusty skiier, heading out from his old crusty van.
We get chatting. I try angling for some telemark skiing advice. He pointedly ignores me. Then we find out we both were born and grew up in the same tiny village of Bulga. He knows my grandfather. I try angling for some skiing advice again, thinking now we have a connection it might help. Clearly, he wants to be a cranky old man alone out in the snow. I don’t blame him. We go our separate ways.

Around midday, once the sun has slushed up the snow well enough, I crack open my musili bar, and then start making my way out to Mt Stillwell.
I follow the tracks of some snowshoers, and meet them on top of Mt Stillwell. We have a clear view of the entire main range, and of Mt Kosi. They are impressed by me skiing, especially me skiing alone. I feel badass. 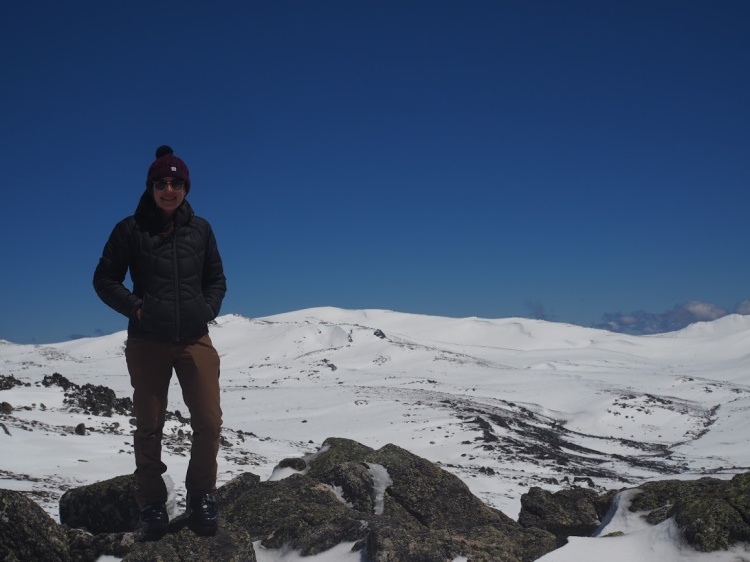 After they leave, I try skiing down Mt Stillwell. I pointedly waited until they left, lest they find out I am actually not badass and can’t telemark for shit.
The afternoon is then spent getting very sunburnt, and mastering my telemark turns. Up and down, up and down I go on the back of Mt Stillwell. There isn’t a soul in sight, and I enjoy the pressure free environment to practice over and over again.

The clouds start rolling in as the weather change hits, and I pack up and start heading back to the car. 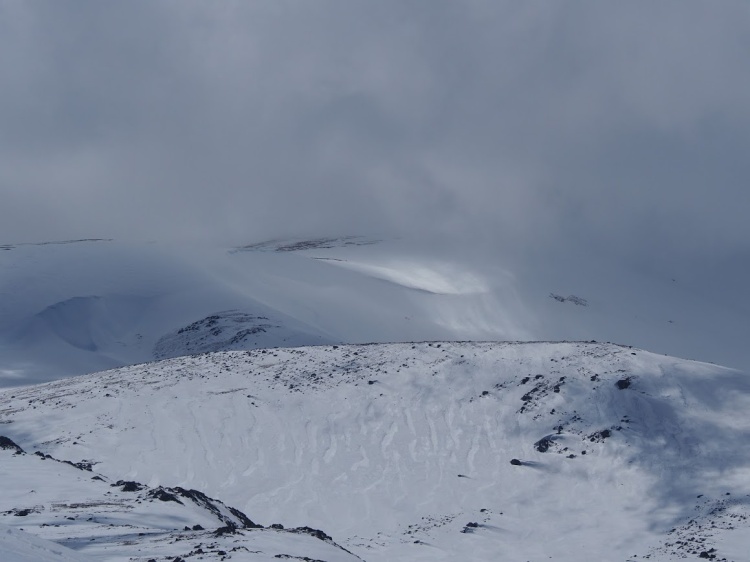 Emboldened by my afternoon of practice, I try my hand at skiing down the untouched steeper slopes at the resort. I smoothly curve my way down the slope, and secretly hope that the caretaker down at the resort was watching and thinks I am as badass as I feel in that moment. 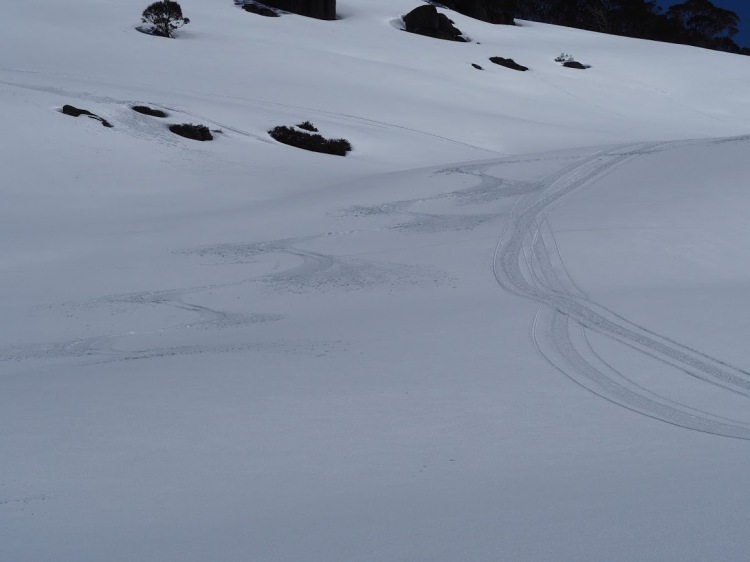 Having survived a whole 2 days in the backcountry alone, without sunscreen and minimal food, I reward myself with a giant meal from Maccas on the way home.

Doctor by day (and some nights), sloth-lizard by evenings, and dirtbag on weekends View more posts